Now here is something that doesn’t come up very often at all. It’s a beautifully cast early ‘open’ range, called such because the firebox was open rather than the fully enclosed ranges produced later in the century. This range bridges the gap between the 18th century open down hearth ranges and the later closed type. Early cooking was preformed in a wrought iron grate, usually with adjustable cheeks with various ancillary parts like a chimney crane, spits and smoke jacks and spit jacks etc to turn them.
Here, various features of the earlier method have been retained like the adjustable cheek (used to alter the size of the fire) and chimney crane. However, the fire now features an oven and hot plates for cooking and the whole is cast into a range with fantastic classical detailing. The cheek is moved via a rack that is wound with a crank handle engaged in a socket to the bottom left of the firebox- a great detail!
I have loosely mocked this range up but will be restoring it at some point early next year unless otherwise requested. Most likely dating from around 1830-1840. 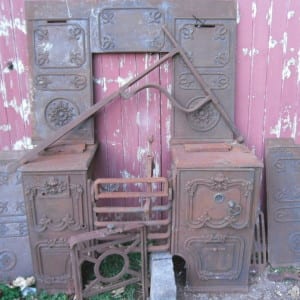